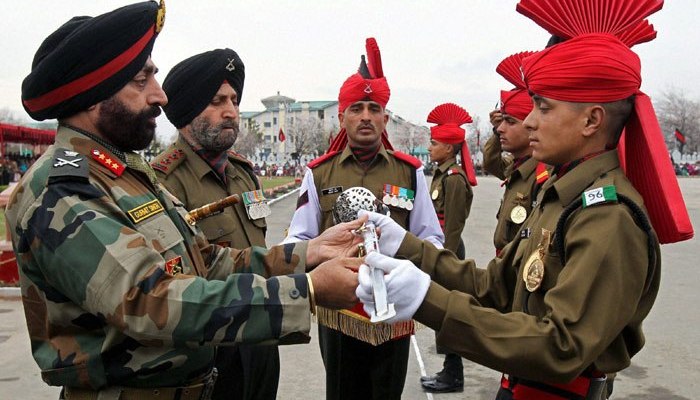 The Jammu and Kashmir Light Infantry Regimental Centre in Srinagar recently held a Passing Out Parade recently for 219 new recruits from J&K, which marked their graduation and progression into soldiers following 1-year training. Lieutenant General AK Bhatt, the General Officer Commanding of Chinar Corps, was the Reviewing Officer of the ceremony held at the Bana Singh Parade Ground. Also present in the Passing Out Parade were relatives and parents of young soldiers, and a numerous military and civil dignitaries.

The Passing Out Parade marked the completion of Recruit Course Serial number 113. The soldiers hailing from different regions of Jammu and Kashmir marched in unison pledging their lives for national service. The young soldiers sang aloud the Regimental Song of Jammu and Kashmir light Infantry ‘Balidanam Veer Lakshnam,’ which not only inspired the audience present at the parade ground but also reverberated in the Kashmir Valley. 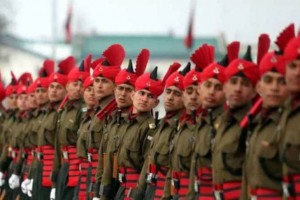 Lieutenant General AK Bhatt cheered on the new recruits for conducting the Passing Out Parade immaculately. The Reviewing Officer hailed the contribution recruits make in encouraging more youth from the state to take up the mantle forward and join Army. The GOC of Chinar Corps also praised the role the parents played in guiding and motivating their children towards national service and told the youth to tread a peacemaking path in the Kashmir Valley. The Commander of Chinar Corps also gave a warning that anyone who takes up Arms will be dealt with and said that they are nation’s enemies.

The passing out parade also showcased a felicitation ceremony for the new recruits, who excelled in various facets of the rigorous Army training. Firdous Ahmad Khan from Bandipora was conferred with the ‘Sher-e-Kashmir Sword of Honour,’ and the Triveni Singh Medal given to the ‘Overall Best Recruit’. Navdeep Biehal from Jammu walked away with the Chewang Rinchen Medal given to the ‘Best in Firing’.

After the felicitation ceremony of new recruits who are set to join Army now, relatives and parents attended the pipping ceremony, a tradition that follows the Passing Out Parade. The parents of young soldiers from Jammu and Kashmir were conferred with ‘Gaurav Padaks,’ as a sign of gratitude. The ‘Gaurav Padak’ instituted by the Indian Army is an acknowledgment of the contribution parents make for committing their wards to the service of the nation.