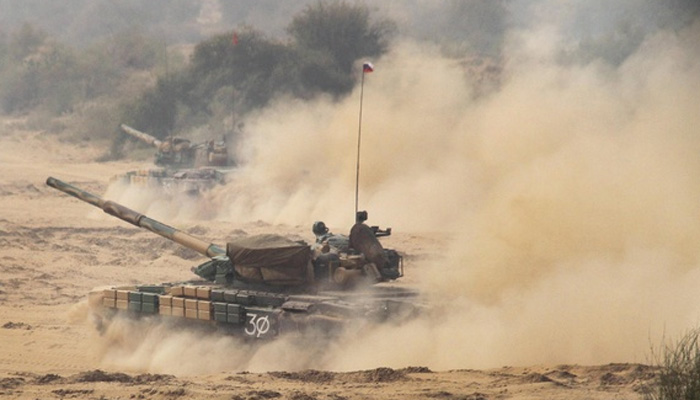 The Indian Army is holding a major exercise by the name of, which is being handled by the Mathura-based Strike Corp. The exercise is being held in the Mahajan field firing range of Rajasthan, which is a desert terrain. The objective is to evaluate the capability to strike deep into enemy domain in an integrated air-land battle setting. Shatrujeet is in its last phase and the coming week on April 22, Army Chief D. S. Suhag is set to arrive and conduct a review.

The exercise is operationally oriented, and focuses on validating integrated theatre battle fighting concept. This will be done through the incorporation of new age technologies, weapon platforms and systems, as well as long-range precision targeting vectors. Lt. Gen. Shaukin Chauhan, who is the Mathura Strike Corps’ Core Commander, has reviewed the maneuvers, which include the insertion of heli-borne and airborne activity.

The exercise aims at reaching seamless coordination among all involved forces in a nuclear biological chemical setting. This way, it will be possible to deliver a heavy blow to the enemy at devastating speeds. Achieving this objective takes the integration and use of high-end technology and all the latest multi-dimensional modern weaponry that our armed forces currently have at their disposal. 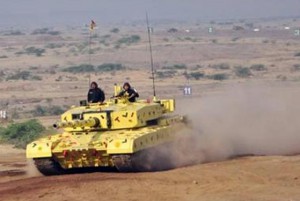 India’s longtime offensive doctrine and capability have undergone significant change over the past decade, and it has become the norm for the Army to conduct exercise as the one above. This serves to train the troops in their offensive role and weapons usage.

Even though Pakistan has the Shaheen and Ghauri series of long range nuclear missiles in its possession, it frequently advertises the 60-km Nasr (Hatf-IX) missiles with sub-kiloton plutonium warheads, touting this is a counter to India’s superiority in the conventional military arena. Islamabad has been highly vocal about their tactical nuclear deterrents.

The Indian Armed Forces have risen to an even keel in this aspect, something that became an imperative after it took a month for its strike formations to be forward mobilized under Operation Parakram in 2001. By that time, Pakistan had managed to bolster defenses. Our arm has since been systematically building up its capabilities in this regard, with heavy emphasis on improving mobilization and cross-border strikes, which can now be carried out in three to four days. This of course would require proper logistical backing as well as timely reinforcements to yield the best results.