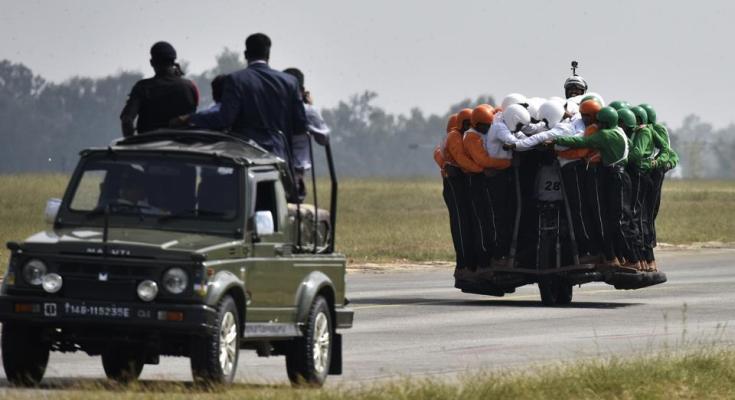 A team of the Army Service Corps (ASC), called the Tornadoes, set a new Guinness World Record on a Royal Enfield motorcycle. There were fifty-eight Indian Army personnel on the motorbike and the team rode the bike for 1,200 meters. The stunt was performed at the Yelahanka Air Force Station in Bengaluru, and they ride right into a world record by the performance.

A Defence Ministry statement said that the act was performed for the Limca Book of Records, Guinness Book of World Records, and Unique World Records. The team was dressed in a Tricolor, and was led by Major Bunny Sharma. He was on the vanguard when Subedar Rampal Yadav steered the bike. Other members of the team were on the flanks that were attached to the motorbike. 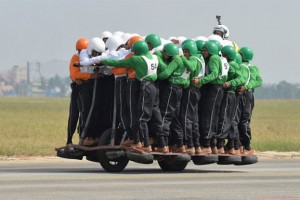 The fifty-eight daredevils of the Indian Army performed the stunt on November 19. The Army Service Corps made their first appearance in the 9th Asian Games in 1982 and performed in New Delhi. Since then, they have made more than thousand performances across the world. The statement from the Defence Ministry added that the Army Service Corps team now holds about nineteen national and world records. It also includes a record by fifty-six men riding a motorcycle in the year 2010. By their latest performance the ‘Tornadoes’ broke this previous record by the Army Signal Corps team named Daredevils.

“For last 10 months, all 150 members of the team have toiled hard sacrificing sleep and family time to achieve this, making this 20th record by the team. Practice was important as it was to bring together such a large number of people on a constrained and most importantly a moving object,” team leader Major Sharma said.

The latest record is the twentieth record set by the Army Service Corps and the performance is much inspiring to the stunt loving youth of the country who are looking forward to join the Indian Armed Forces. If you are a person looking to join Army, keep track of the Indian Army recruitment notifications and the details of various recruitment rallies shared on our website.