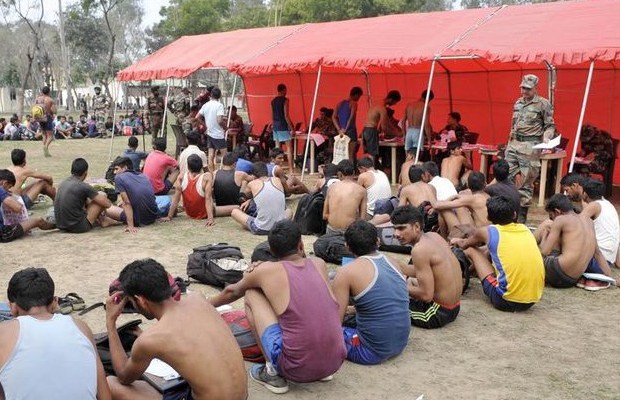 The selected eligible candidates who are declared fit are called to the Common Entrance Examination venue in the wee hours before the scheduled day of the exam as per the recruitment procedure of Army. As you may already know, the Indian Army recruitment procedure includes clearing the eligibility criteria, the physical and medical tests, and then passing the CEE.

As biometric verification takes time, the eligible candidates should report to the exam venue by 02:00 am, even as they enter the exam hall by 07:00 am and start writing sharp at 09:00 am in the morning. However, prior to this, the candidates face their main challenge as yet. 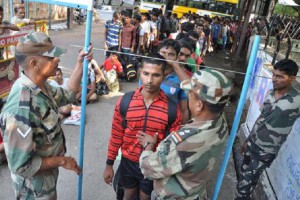 Recently, running the 1.6 kilometers seemed a hurdle for the candidates partaking in the Indian Army recruitment rally, which took place at the Ambedkar stadium in Karimnagar. The run may seem short, but 5 minutes and 31 seconds to 5 minutes and 45 seconds is the stipulated time to complete the run in the Open Bharti Rally.

The rally began in Karimnagar this month and out of the 3000 to 3500 candidates present in the rally, only around 200 to 250 youths have overcome the running test from the Karimnagar district, where around 400 plus candidates from Mahabubnagar and Khammam combined cleared the hurdle indicates reliable sources.

Obviously, to join Army and thereby serve the nation dutifully, clearing the run is of prime importance in the Physical Fitness Test (PFT). While some remain fit, the select candidates prove their merit in the initial stage of the Open Bharti Rally.

The Indian Army recruitment was organized for the posts of Soldier General Duty, Soldier Tradesmen, Soldier Nursing Assistant, Soldier Clerk, Soldier Technical, and Store Keeper Technical. The candidates who complete the 1.6 kilometers run before the stipulated time get a Grade Point-I score. On the other hand, those who finish the run by the stipulated time get a Grade Point-II score. GP-I is helpful especially if the candidate performs somewhat below par than expected in other tests in the Open Bharti Rally.