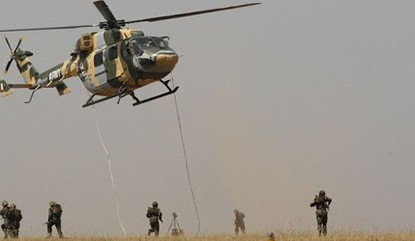 Helicopters used by the Indian Army

Airpower is one of the most potent force in modern warfare.  In an country like ours where we have a varied terrain ranging from the plains to high altitude regions, the army needs to be well served with equipment and vehicles to transport, patrol and if required attack a hostile element.

Cheetah – is a light helicopter originally manufactured by Sud Aviation and later Aérospatiale, France.  The Cheetah has been extensively used in the Himalayas, where it is operating at altitudes beyond 20,000 ft and in Siachen it is the backbone of Indian Army’s strategic military presence. It also holds the highest altitude record for a helicopter flight reach about 12,442 meters high in 1972.

Chetak – is an enlarged version of the Cheetah. It is used in a broad spectrum of roles ranging from winching operations, cargo operations, under slung cargo operations, Casualty evacuation, parachute jumps, formation flying and communication sortie.

Dhruv – is a multi-role helicopter developed and manufactured by India’s Hindustan Aeronautics Limited (HAL). Military versions inducted in ARMY are for transport, utility, reconnaissance and Casualty -Evacuation roles. The helicopter design enables the crew to survive vertical impacts of up to 30 feet per second, due to the safety seats and a design of controlled deformation of fuselage crumple zones.